The Star of David’s 12 Tribes/Sides

The twelve sides of the six-pointed star are said to represent the twelve tribes of Israel.

– You Won’t Believe Which 2 Asian Countries Are Standing 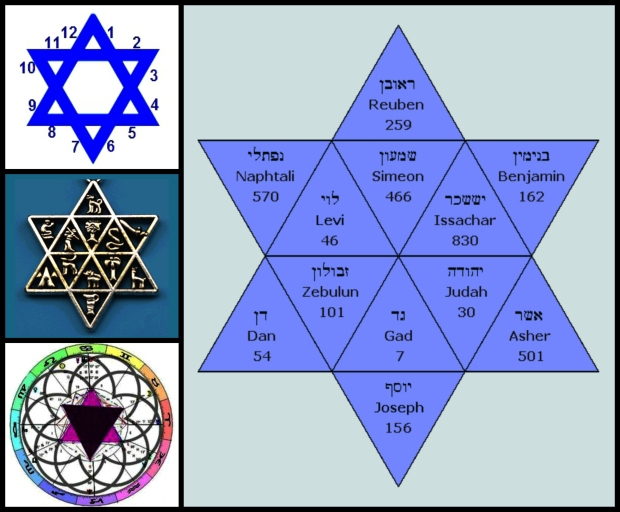 The star has 12 lines about its perimeter, possibly representing the 12 Tribes of Israel.

– What is the Star of David and is it biblical? GotQuestions.org

Some note that the Star of David is a complicated interlocking figure which has not six (hexogram) but rather 12 (dodecogram) sides. One can consider it as composed of two overlapping triangles or as composed of six smaller triangles emerging from a central hexogram. Like the Jewish people, the star has 12 sides, representing the 12 tribes of Israel.

– Star of David, by Rabbi Shraga Simmons, Aish.com
Some say that one triangle represents the ruling tribe of Judah and the other the former ruling tribe of Benjamin. It is also seen as a dalet and yud, the two letters assigned to Judah. There are 12 Vav, or “men,” representing the 12 tribes or patriarchs of Israel.

There were many ways in Jewish history to order the encampment of the tribes; Dr. Cohen mentions three of them and the third is:

“Jewish folklore describes the encampment of the tribes in the desert as forming a Star of David, twelve focal points being connected one to another, and all of these arranged around a central, thirteenth, focus–the Tabernacle and the tribe of Levi ministering the sacred service. A Yiddish anthology for the holidays describes the unique arrangement of the Israelite camp and its symbolism as follows:

According to this picture, the Star of David is the symbol of tribal unity in Israel, a single formation protecting the Sanctuary shared by all”.

– Encampment of the Tribes, Star of David Blogspot

© marianne's page- where the Word of God is free !!

Got Talmud? Questions and Thoughts on Judaism and Living from Rabbi Sid Slivko

All the rest is commentary. Now go and learn." (Shabbat 31A)

The Tree of Life

What is the shared core of all religious and esoteric traditions?

A Basic Understanding of Judaism, Christianity, and the Judeo/Christian Bible

I Have Seen God

A Journal of Personal Revelation from a Liberal Panentheist.

World Of Alexander The Great

"Everything is possible to him who will try"

WITHIN The Black Community

Teachings & Sayings of the Sages

themissionlife.wordpress.com/
Sequim and Beyond
The Aida Blog.

All Dressed Up, Nowhere to Go!

A Basic Understanding of Judaism, Christianity, and the Judeo/Christian Bible

Sharing Hope through the Charism of Healing.

The about.me Blog
The Templar Knight

Mysteries of the Knights Templar